Reedsville, WV — 05/01/2015 — For over 40 years, the Delano’s brand has been a part of the Preston County business community. The family-owned stores were originally named for West Virginia native Delano Fultz. Over the past twenty years, Delano’s son Kent and daughter-in-law Melissa have built their business into what is now Delano’s Furniture & Mattress. Their two retail locations showcase quality furniture at affordable prices, and crafted within the United States whenever possible. 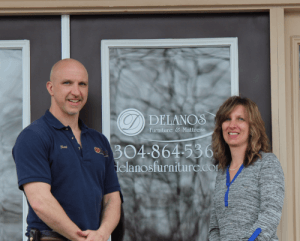 In recent years, Kent Fultz began to source mattress sets that were American-made. When he discovered Imperial Bedding Company, he knew he had found something unique. Fultz hand-picked his favorite nine Imperial mattresses to create his exclusive ‘Almost Heaven’ Collection.

“There is a rich heritage in West Virginia for producing quality items and we are proud to offer mattresses that reflect this value,” explains Fultz. “The craftsmanship of this brand reflects local pride in the design and materials both inside and out. Every ounce of material in an ‘Almost Heaven’ set has a purpose with durability and comfort in mind. The double-sided construction begins with a trademarked innerspring system as its core. Then, high resilient foam is used on both the top and bottom instead of cheaper convoluted foam that other manufacturers use. When a mattress can be flipped, the life of the product is extended.”

About ‘Almost Heaven’ Collection
This complete line of bedding is created in West Virginia by the Imperial Bedding Company, using all American-made components. Much like Delano’s, Imperial has been family-owned and operated since 1969. The company is located just outside of Huntington and employs over 80 local craftsmen. In addition to the ‘Almost Heaven’ Collection, Imperial Bedding proudly manufactures luxury mattresses for The Greenbrier Resort and West Virginia State Park lodges as well.

The ‘Almost Heaven’ phrase has a long tradition of being paired with West Virginia, as a result of John Denver’s song “Country Roads”. By the 1980’s, when the state transitioned away from the using the slogan, Imperial owner Ronnie Rowe registered “Almost Heaven” as a brand name for one of his mattresses. A few years later, those two iconic words would be used for one of Imperial’s most popular mattress models.

“Delano’s has carried Imperial Bedding mattresses for several years. When we realized that the Almost Heaven brand was becoming a customer favorite, we approached Imperial to become the exclusive retailer in this area,” says Fultz. “Even though the Imperial brand is known throughout the country, there are still many households that are not aware that these high-quality bedding options are produced right here in the Mountain State. No other area retailers are able to showcase this special collection, so we decided to completely re-design our Delano’s company website to reflect all of the details and benefits of these ‘Almost Heaven’ mattresses. The quality of this collection is superior to even some of the nationally-recognized brands. We are confident the ‘Almost Heaven’ brand will meet the demand for premium double-sided bedding that is locally sourced.”

Share Post
Previous
Why should I buy my next mattress from Delano’s Furniture and Mattress?
Next
What sets Delano’s apart from other area home furnishing and bedding stores?